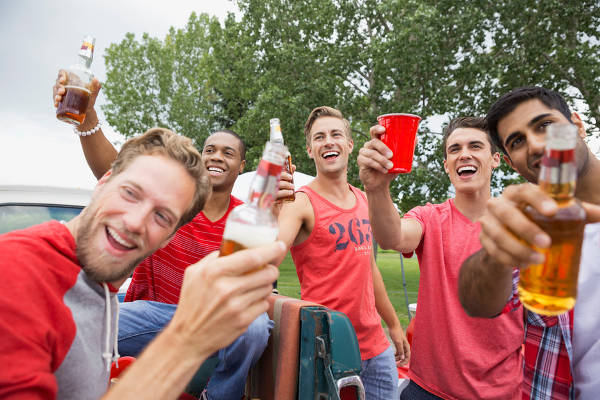 When I was a little, ok a lot younger, I joined a fraternity at Chico State University. I had vowed not to join an organization like this after my experience with the Sportsman Club at San Rafael High School. That experience which included a myriad of humiliating, exhilarating, and sometimes painful forays into the realm of “I can’t believe I just did that?”, made me want to run upon the very mention of pledging. I did however get to wear the Sportsman jacket (bright burgundy with white wide lines accented with gold) which only a handful could claim in a high school of 2,000 students.

I was well into my second year when my roommate (Tom Gauldin) became friends with the neighbors upstairs in the apartment complex. Those two gentleman were Mark Finocchio and Brian Machado members of the Sigma Nu fraternity. We would play music for them periodically when they would entertain female guests over for dinner. Tom played the guitar and I play the violin. This was a wonderful time, carefree, just going to school and playing music.

Well, as fate would have it Brian and Mark asked us if we’d like to play at a talent show at the frat house. We said yes not knowing that this seemingly innocent acceptance would lead to a life changing moment in time. I believe we won the talent show or perhaps we could have tied with the monkey and organ grinder… things are a bit fuzzy regarding that circumstance. However what isn’t fuzzy is what happened next.

Tom and I were asked if we would like to pledge the fraternity. Tom gave a hard no and I said I’d have to think about it. The only reason I had to think about it was because the guys in that frat at that time were some of the best people I’d ever met. Well, after a window I was given to accept I capitulated and accepted the bid to join. I was the last one in my pledge class of 25 strong to accept hence my IK (Pledge number) was 91. We had such a great group of pledges that ingested even more energy into the fraternity at a time it was already thriving. The frat had only been started less than two years before and had the energy and drive to build a base that has lasted to this day and will continue well beyond my lifetime.

I won’t go into the stealing of an actives car when we were dropped in the middle of no where or the many keg parties along the way. I will suffice it to say that our chapter (Sigma Nu Iota Kappa 194) was built on a foundation of strength that has endured many challenges.

The beauty of this group of men is that today I can go back (having pledged some 40 years ago) and still feel the commitment, honor and integrity that made it so appealing to me when I was younger. Without judgment I am received as a respected member of a legendary time. The events of the past are brought up to enhance the current members belief in a group that created the perfect storm of influence that now has grown to a thousand members.

I am writing this blog because this weekend I am going to my fraternity reunion. I so look forward to spending time with the brothers I love in one of the most beautiful places on earth, Chico California.

I feel so blessed to have made a choice that has been one of the most rewarding of my life. I can’t thank Brian and Mark enough for being the catalysts to share their fraternal experience that has enhanced my life through these four decades.

As we reach our twilight years (which have come so rapidly) we now are witnessing some of our closest brothers passing away. This weekend will also be a tribute to those that have gone on to the “Chapter Eternal”. Several founding fathers and others way too young with so much life left are no longer here. The sadness I feel when I think of these men sits on my shoulder like a sleepy silent storm.

They now live in our minds, hearts, and our souls… though not in life.

This blog is sponsored by PAZAZ™ “The Magic of Cooking” Kitchen tools for the discerning chef. Please go to www.pazazshop.com to purchase these AMAZING kitchen tools.